Since October 2014, are used experimental vaccines (translational medicine) against Ebola in Bamako, Mali. 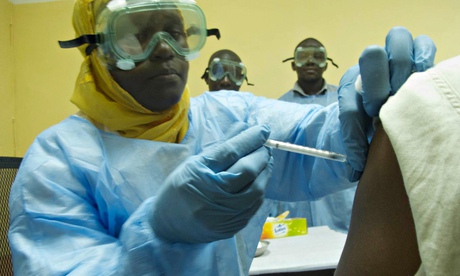 .
Ebola: Experimental drugs and vaccines
.
With more than 5,000 deaths from Ebola in West Africa, the race is on to find a cure. In September, the World Health Organization (WHO) announced that experimental treatments and vaccines for the virus should be fast-tracked.
.
Now three research projects will take place in West Africa, testing antiviral drugs and the use of survivors' blood to treat the sick.
.
What is the current treatment for Ebola?
There is no licensed treatment or vaccine for the Ebola virus. Hospital treatment is based on giving patients intravenous fluids to stop dehydration and antibiotics to fight infections. Strict medical infection control and rapid burial are regarded as the best means of prevention.
.
So what are scientists doing now?
They are focusing their efforts on two approaches - treatments to help people already infected with the virus and vaccines to protect people from catching it in the first place.
There are lots of different experimental vaccines and drug treatments for Ebola under development, but they have not yet been fully tested for safety or effectiveness. The aim is get them tested and signed off for use as quickly as possible.
.
Research projects announced
The medical charity Medicins Sans Frontieres announced that three of its treatment centres in West Africa would each host separate research projects to try to find a cure for the Ebola virus. The first trials are due to start in December and the first results could be available in February 2015.
.
These three trials will research the following:
Convalescent blood and plasma therapy - using blood from Ebola patients who have survived, which contains antibodies that successfully fought off the virus, to boost sick patients' immune systems. This approach has worked for other infectious diseases. The trial will take place at the Donka Ebola centre in Conakry, Guinea, led by the Antwerp Institute of Tropical Medicine (ITM)
The antiviral drug brincidofovir - it works by interfering with the virus's ability to multiply. Up to 140 consenting patients will take the tablets twice a week over a two-week period, and survival rates will be compared with those before the trial. This research will be funded by the Wellcome Trust and led by the University of Oxford, at an unconfirmed site
The antiviral drug favipiravir, led by the French National Institute of Health and Medical Research (Inserm), in Gueckedou, Guinea
.
Vaccine trials
Already under way are safety trials in humans of two experimental vaccines, produced by GlaxoSmithKline (GSK) and the Public Health Agency of Canada.
Normally it would take years of human trials before a completely new vaccine was approved for use but the aim is to have 20,000 doses that could be used in West Africa by early next year.
The GSK vaccine uses a chimpanzee-derived adenovirus vector with an Ebola virus gene inserted. It is being tested in Mali, the UK and the US.
Research on the Canadian vaccine is also under way in the US. It uses an attenuated or weakened vesicular stomatitis virus, a pathogen found in livestock; one of its genes has been replaced by an Ebola virus gene.
.
Experimental treatments
Experimental drugs such as Zmapp have already been given to patients in the current outbreak, but they have not saved all patients. Two US aid workers and a Briton recovered after taking it, but a Liberian doctor and a Spanish priest died. The treatment is a mixture of three monoclonal antibodies that attack proteins on the surface of the virus.
But the medicine has only previously been tested on animals, and experts say it is still unclear whether the drug boosts chances of recovery. Stocks of the drug have also been extremely limited. Manufacturers of the drug say it will take months to increase production.
What are the chances of success?
Experts say pharmaceutical companies are unlikely to invest the huge resources needed to develop new drugs when these would probably be used only occasionally in relatively small numbers of people. They say investment is needed from international agencies to have any realistic chance of success in the future.

October 6, 2014, 6:33 PM|Doctors in Dallas have started using the experimental drug brincidofovir on Ebola patient Thomas Eric Duncan, who is critical but stable condition. Duncan's treatment will be the drug's first test against Ebola in humans. Manuel Bojorquez reports.