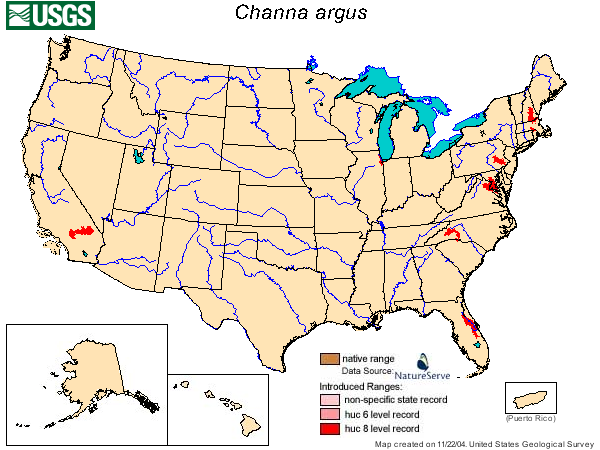 The catfish that hunts pigeons on land, has come to New York City’s Central Park.

Snakeheads are sold in the U.S. both as food in Asian markets and as pets, and reproducing populations of snakeheads have now been discovered in Maryland, California and Florida in addition to New York. Individual fish have also been caught in Maine, Massachusetts, Rhode Island and Hawaii.

Not welcome in Canada: Preventing a Northern Snakehead invasion
The Northern Snakehead might enjoy life in Canada, but it would not be welcome here. This fish, native to eastern Asia, has invaded parts of the United States, where it threatens to disrupt ecosystems and native fish species unaccustomed to its presence. Scientists at Fisheries and Oceans Canada (DFO) want to stop the snakehead from establishing a base in Canadian waters – and building a strong defence is the key to success.
The risk posed by snakeheads is very real. Several of the 36 species have a long history of invasions, and are very hardy. They can even live out of the water for a time – to pursue their prey or find a new home if the former one dries up. They survive winter under the ice of northern lakes; some have even recovered from being frozen! The Northern Snakehead, in particular, thrives on conditions that are similar to many Canadian waters. It is a voracious predator, and it grows rapidly to an adult length of 1.5 metres or more.

The northern snakehead, a voracious invasive species that can live out of the water for 4 days, is being sought in New York City.
By: Melissa Breyer
Tue, Apr 30, 2013

Even creepier than the catfish that hunts pigeons on land, is the toothy northern snakehead, a carnivorous fish that grows to at least three feet in length, can breathe air and can survive for up to four days out of water. It can survive for even longer periods in mud and moist environments. Oh, and it travels over land by wriggling its body along the ground.
And it has come to New York City’s Central Park.
(Insert scream, here.)
The fish that is making wildlife agencies skittish is an invasive species native to China, Russia and Korea. Snakeheads are top predators and feed ravenously on other fish as well as frogs, crayfish and aquatic insects. (Your puppies and children are safe. Probably.)
To make things worse, it's a fish with no natural predators in the U.S., it can spawn multiple times every year, and females release tens of thousands of eggs with each batch.
So, basically, they're huge, walking carnivorous fish that can live outside of water, have no predators, and possess a remarkable reproductive rate. Incredibly cool in an evolutionary sense, but at the same time: Houston, we have a problem.
Ever since reports first surfaced of one of the freaky fish being spotted in the Harlem Meer, a lake in the northeast corner of Central Park, environmental officials have conducted surveys of the water, with a new survey planned for this week. Signs have been posted warning anglers to beware: if spotted, they should "secure the fish" and "keep it in a secure container until it is picked up by officials."
Snakeheads are sold in the U.S. both as food in Asian markets and as pets, and reproducing populations of snakeheads have now been discovered in Maryland, California and Florida in addition to New York. Individual fish have also been caught in Maine, Massachusetts, Rhode Island and Hawaii.
The escapees are thought to have been purchased as pets, then set loose by owners who no longer wish to keep them. However, in one remarkable story a Maryland man ordered a pair of live snakeheads from a market in New York's Chinatown to prepare a traditional soup to cure his ill sister. By the time the fish arrived, his sister had recovered, and he released them into a local pond. Oops.
Last spring, the Maryland Department of Natural Resources Inland Fisheries set a $200 bounty for the successful capture and killing of any northern snakehead. (Perhaps New York should consider a similar reward?) In the meantime, enter Central Park at your own risk.

The northern snakehead (Channa argus) is a type of snakehead fish native to China, Russia, North Korea, and South Korea. In Europe, the first report of the species was from Czechoslovakia (now the Czech Republic) in 1956.[2] In the United States, the fish is considered to be a highly invasive species.

In many areas of the world, the snakehead fish is considered to be an important food fish. Due to its economic value, C. argus has been introduced (intentionally or not) to several areas in the continental United States. In the US, the snakehead is a top-level predator; its introduction poses a substantial threat to native fish populations.

The fish first appeared in US news when an alert fisherman discovered one in a Crofton, Maryland, pond in the summer of 2002.[8] The snakehead fish was considered to be a threat to the Chesapeake Bay watershed, and wary officials took action by draining the pond in an attempt to destroy the species. The action was successful, and two adults and over 100 small fish were found and destroyed. A man admitted having released two adults, which he had purchased from a New York market, into the pond.[9]

In 2004, 19 northern snakeheads were captured in the Potomac River, and they were later confirmed to have become established (were breeding). They are somewhat limited to that stretch of the river and its local tributaries, upstream by the Great Falls, and downstream by the salinity of Chesapeake Bay.[9] Tests found they are not related to northern snakeheads found in other waters in the region, alleviating some concern of their overland migration.[10] Northern snakeheads continue to be caught in the river as of 2012.[11]

The northern snakehead has been found in three counties of Florida, and may be established. Apparently unestablished specimens have been found in Flushing Meadows-Corona Park, New York, two ponds in Philadelphia, Pennsylvania,[9] a pond in Massachusetts, and reservoirs in California and North Carolina.[1] In 2008, the northern snakehead was found in drainage ditches in Arkansas, as a result of a commercial fish-farming accident. Recent flooding may have allowed the species to spread into the nearby White River, which would allow an eventual population of the fish in the Arkansas and Mississippi Rivers.

In the summer of 2008, an infestation of the northern snakehead was confirmed in Ridgebury Lake and Catlin Creek near Ridgebury, New York. By August 2008, the New York State Department of Environmental Conservation had collected a number of the native fish, and then poisoned the waters with a liquid rotenone formulation. After the poisoning, the NYSDEC had to identify, measure, and additionally process the fish to adhere with Bureau of Fisheries procedures before disposal. The treatment plan was operated under several agents, and New York State Police were placed on stand-by in case of protests of local residents of the area.[2]

A new concern is that this fish's spread is getting close to the Great Lakes, which it may enter and disrupt that ecosystem.

When the snakehead was found in Crofton, the piscicide rotenone was added to the three adjacent ponds.[1] This method of containment killed all fish present in the water body to prevent the spread of the highly invasive snakehead. The chemical breaks down rapidly, and has a half-life in water of one to three days.[12][13]

The snakehead was found in a pond in Burnaby, British Columbia. The province is considering imposing a ban on the import of the fish to preserve its waterways.[14]

In April 2013, sightings of the species in New York Central Park's Harlem Meer have prompted city officials to urge anglers to report and capture any individuals. Ron P. Swegman, author of several angling essays on Central Park's ponds, confirmed the species had put both anglers and the New York State DEP on high alert.[15][16]

As of late 2013, authorities in Virginia and Maryland are counting snakeheads in the Chesapeake Bay to better understand the impact of the introduction of the fish to the local ecosystem.[17]