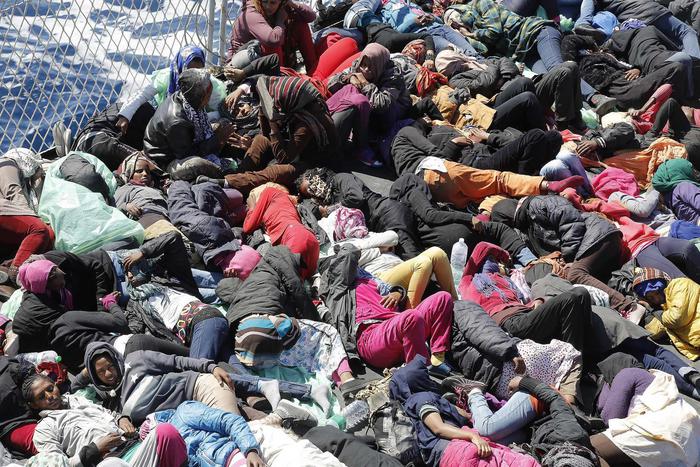 In April 2015, at least five boats carrying hundreds of migrants to Europe sank in the Mediterranean Sea. Together over 1,100 people were thought to have died. Since the early 2000s, Lampedusa has become a prime transit point for immigrants from Africa, the Middle East and Asia wanting to enter Europe. In 2004 the Libyan and Italian governments reached a secret agreement that obliged Libya to accept African immigrants deported from Italian territories. This resulted in the mass repatriation of many people from Lampedusa to Libya between 2004 and 2005, a move criticised by the European Parliament.[15]

By 2006, many African immigrants were paying people smugglers in Libya to help get them to Lampedusa by boat.[16] On arrival, most were then transferred by the Italian government to reception centres in mainland Italy. Many were then released because their deportation orders were not enforced.[17]

In 2009, the overcrowded conditions at the island's temporary immigrant reception centre came under criticism by the United Nations High Commissioner for Refugees (UNHCR). The unit, which was originally built for a maximum capacity of 850 people, was reported to be housing nearly 2,000 boat people. A significant number of people were sleeping outdoors under plastic sheeting.[18] A fire that started during an inmate riot destroyed a large portion of the holding facility on 19 February 2009.

In 2011, many more immigrants moved to Lampedusa during the rebellions in Tunisia and Libya.[19] By May 2011, more than 35,000 immigrants had arrived on the island from Tunisia and Libya.[20] By the end of August, 48,000 had arrived.[21] Most were young males in their 20s and 30s.[22] The situation has caused division within the EU, the French government regarding most of the arrivals as economic migrants rather than refugees in fear of persecution.[23] Italy has repeatedly requested aid from the EU in managing refugees, but has been turned down.

In July 2013, Pope Francis visited the island on his first official visit outside of Rome. He prayed for migrants, living and dead, and denounced their traffickers.[24] In October 2013 a boat carrying over 500 migrants, mostly from Eritrea and Somalia, sank off the coast of Lampedusa with the deaths of at least 300 people.[25] The press referred to the incident as the "Lampedusa boat disaster".[26]

From January to April 2015, about 1600 migrants died on the route from Libya to Lampedusa, making it the deadliest migrant route in the world.[27]