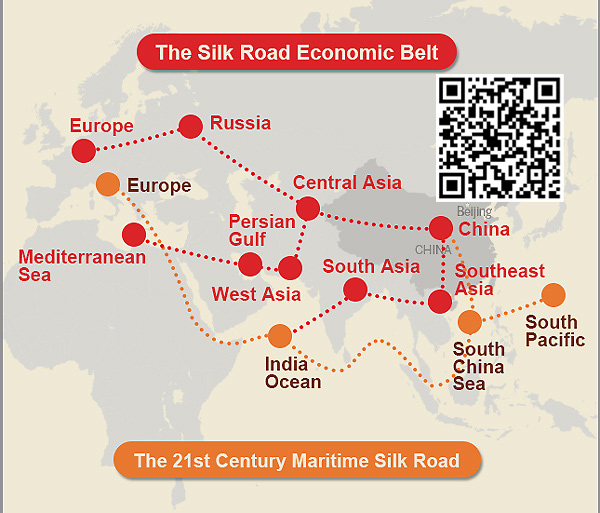 One Belt, One Road (Chinese: 一带一路; pinyin: Yídài yílù, also known as the Belt and Road Initiative; abbreviated OBOR) is a development strategy and framework, proposed by People's Republic of China that focuses on connectivity and cooperation among countries primarily in Eurasia, which consists of two main components, the land-based "Silk Road Economic Belt" (SREB) and oceangoing "Maritime Silk Road" (MSR). The strategy underlines China's push to take a bigger role in global affairs, and its need to export China's production capacity in areas of overproduction such as steel manufacturing.

It was unveiled by Chinese leader Xi Jinping in September and October 2013 in announcements revealing the SREB and MSR, respectively.

"China is an immensely important partner in Africa's development. It has been...over many decades. And certainly African countries see China as a very distinct partner," said Suzman.

Suzman regarded China as a "good example for Africa" in terms of managing many challenges, such as health and agriculture.

"Even acknowledging that China still has some large pockets of domestic poverty that need help, but there is a lot of learning from Chinese experiences for Africa," he said.

In the area of health, Suzman said, China has a remarkable record in reducing child mortality and maternal mortality over the last 30 years, and that's exactly the model that many African countries are now following."

"Some of the countries that have had real improvements like Ethiopia and Rwanda have looked very consciously to China, for example, on how to do everything from access to vaccines, to the training of health care workers," the president added.

Meanwhile, he described China's agriculture model a "perfect example" that the foundation is devoted to popularize in Africa.

Suzman said he noticed that China has done a lot of work over the years, creating agricultural demonstration centers to show and help African countries do better. He said the foundation was looking forward to cooperating with China in this regard.

"We may also have an MOU about whether we might be able offer our agriculture expertise, and how to make those more effective," he noted, adding that for the foundation, it's about broader dialogue and ongoing set of partnerships in Africa and they've seen china's potential role because of its expertise which has very high impact.

Suzman also noted the progress Chinese companies made in innovation, from which Africa and the world will benefit.

"It's something that can help as an economic generator and dynamic within China, but also has enormous good outside," he said.

Through cooperation with the Gates Foundation, Aucma, one of the major white goods makers in China, developed a brand new product called Arktek, which keeps vaccines fresh and cold up to a month without any additional energy source, just using ice.

Suzman said the new technology was a result of what Aucma developed with the investment from Bill Gates.

"It's now being taken out to the field. We are so excited about this model...It's a wonderful example where you can combine Chinese technological expertise and innovation, doing it in a low cost way, so this is actually going to be affordable and distributable across Africa," he added.

Talking about China's Belt and Road Initiative, Suzman said it is a broad vision of Chinese economic and political engagement across Asia and spreading it right into Africa.

The Belt and Road Initiative, which refers to creating the modern Silk Road Economic Belt and the 21st-Century Maritime Silk Road to boost international trade and expand global economic ties, was proposed by Chinese President Xi Jinping during his Central and Southeast Asia visit in late 2013.

"It's a very powerful vision of how China engages not only as a global economic power but also a responsible global citizen, and now in areas of agriculture and financial services...We hope under the belt and road policy, it also leaves the door open for a stronger, deeper Chinese engagement around these issues in Africa and elsewhere in the developing world," Suzman added.