A Princeton University study has found that leaks from abandoned oil and gas wellbores pose not only a risk to groundwater, but represent a growing threat to the climate.

Between 200,000 and 970,000 abandoned wells in the state of Pennsylvania likely account for four to seven per cent of estimated man-made methane emissions in that jurisdiction, a source previously not accounted for, the study says.

Pennsylvania, much like Alberta in Canada, is the oldest oil and gas producer in the United States and the scene of intense environmental controversy due to the impact of hydraulic fracturing on its well-punctured landscape.

By Mark Schleifstein, NOLA.com | The Times-Picayune

The state Department of Natural Resources' Office of Conservation is doing an inadequate job of regulating and inspecting the state's oil and gas wells, and is not properly overseeing a growing number of "orphaned" wells abandoned by private operators, according to a report released Monday by Legislative Auditor Daryl Purpera.

The result is an increasing state financial burden for cleaning up environmental problems caused by improperly operated wells and for plugging wells that have been abandoned by oil and gas companies, the report concluded.

A PDF version of the report is available here.

The report was released as Gov. Bobby Jindal is poised to sign several bills protecting the oil and gas industry from "legacy lawsuits" filed by private landowners and the Southeast Louisiana Flood Protection Authority-East to repair environmental damage caused by their operations.

The report recommended that the Legislature increase oil and gas production fees levied by the state and identify other sources of funds to cover the cost of plugging thousands of orphaned wells in the state.

"The current production fee is not sufficient to address the current population of orphaned wells," the report concluded.

The state's existing production fees are $0.015 per barrel of oil and condensate produced and $0.003 for every thousand feet of natural gas produced, which resulted in $4.8 million being collected in the 2013 fiscal year.

Unlike other leading oil and gas production states -- including Texas, Oklahoma and California -- Louisiana has only required 25 percent of the state's 57,819 wells to be properly covered by financial security agreements, the report said. That's because the state's financial security law that took effect in 2000 resulted in 18,000 wells being grandfathered, and state officials have found that another 24,000 wells meet exemption criteria set up by the law.

The financial security requirements are used by the state to plug a well if it is abandoned – "orphaned" – by an operator.

"As of July 1, 2013, there were 2,846 orphaned wells that have not been plugged," said a news release announcing the audit. "Since the financial security requirements took effect, 397 wells have been orphaned by operators exempt from providing financial security."

And the report also found that the amount of financial security required by the law for those operators that aren't exempt from its requirements is "not sufficient to cover the cost of plugging all wells," the report said. It found that Louisiana has one of the lowest financial security amounts required for wells on land that are drilled to less than 3,000 feet deep.

And that doesn't cover the additional cost of remediating environmental damage at the well site, the report said.

The 25 percent of the state's wells covered by financial security means nearly $50 million is available to pay for plugging and cleanup. If the same amount of security were required for the 75 percent of wells exempt because of grandfathering or exemptions, it would total nearly $150 million.

The report also found that the Office of Conservation failed to inspect at least 53 percent of the 50,960 oil and gas wells in the state at least once every three years between July 1, 2008, and June 30, 2013, as required by department rules. That resulted in more than 12,700 wells not being inspected at all during that time, according to the news release.

The Office of Conservation also has failed to develop an effective enforcement process to address noncompliance, the report said.

It found that 7,665 routine inspections showed one or more violations between 2008 and 2013, but the audit found no record of compliance orders in 15 percent of those cases, and not all wells were re-inspected to determine if the violations were corrected.

The conservation office also is ineffective in identifying inactive wells and didn't consistently insure such wells were properly plugged when they had no future use, as required by state regulations.

"Although inactive wells pose environmental and public safety risks and may become orphaned, the state did not issue orders to plug 86 percent of inactive wells reported by operators as having no future use," the news release said.

The state also is not requiring operators to specify when a well may be used again, the report found.

"As a result, wells can be placed in this status for extended periods of time to avoid being plugged and are at a higher risk of becoming orphaned," the report said. It found that of the 11,269 wells listed as being in inactive status with future use as of June 30, 2013, 5,239 had been listed in that status for more than 10 years.

The result, the report said, is that the number of orphan wells may grow in the future, and identified 9,415 inactive wells that "can be considered at risk of being orphaned."

While the state has only plugged an average of 95 orphaned wells a year, the report found that between 2008 and 2013, an average of 170 wells were orphaned each year.

Since 2011, the Office of Conservation has focused on plugging "urgent and high priority wells since these wells pose the most environmental and public safety risks," the report said. That's resulted in an increase in the average plugging cost per well from $26,000 to $163,000. And the agency has not used $1.5 million set aside as security from some operators pending a legal interpretation of how to transfer the money to the orphan well fund.

A 2011 study by the Groundwater Protection Council, a nonprofit made up of state water agencies, found orphaned wells caused about one in five incidences of recorded oil and gas groundwater contamination in Ohio and Texas.

Plugging a well—removing equipment and filling holes with cement—costs $25,000 to $100,000 for conventional sites, by some state regulators’ estimates. Horizontal wells, typical in fracking, will likely cost more to plug, they say. 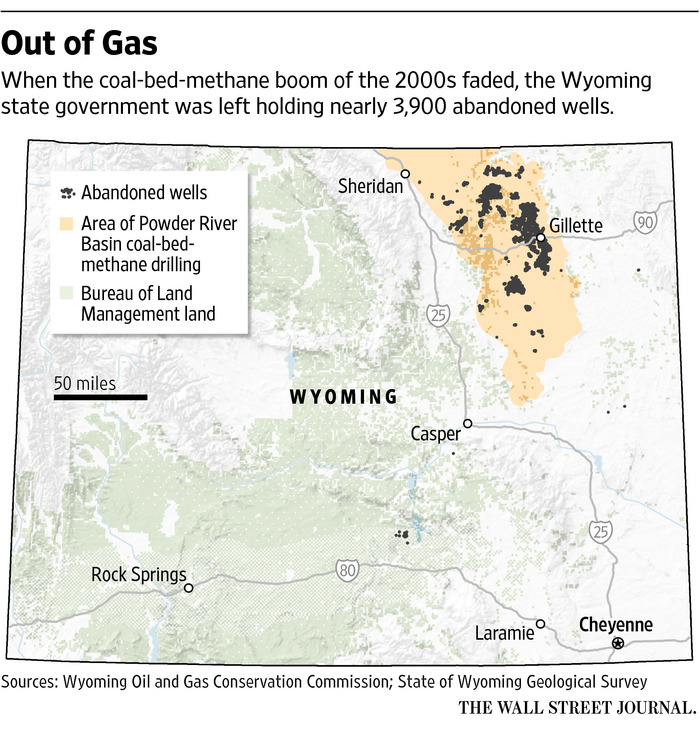 “It is irresponsible to leave them abandoned without dealing with them,” says Wyoming Gov. Matt Mead of his state’s problems with orphaned wells. “We shouldn’t have to pay for it.”

To avoid having to pay steep costs, most states and the federal government have policies to lay aside funds to clean up orphans, primarily by requiring companies to post bond before prospecting. But bonding often sets aside too little, leaving some agencies struggling to clean up tens of thousands of wells.

Oil and gas companies are abandoning wells at a much faster rate than they are reclaiming them, a process that includes a cement evaluation and the placement of a venting cap on top of the well.

Theresa Watson, a former Alberta regulator, noted in a 2013 presentation that an increasing number of horizontal multi-stage hydraulic fractured wells were directly contacting pre-existing wellbores with the "potential to impact assets (other industry property) and groundwater."

To date, there have been more than 20 cases of industry performing high-pressured frack jobs that connected with nearby wells, resulting in eruptions of toxic fluids to the surface.

Some so-called "frack hits" travelled as far as 2,400 metres through natural or man-made fractures and faults before coming to surface. More than 30 such events have happened in British Columbia. All pose risks to groundwater.

"The skeletons are coming out of the closet," said Watson in her presentation.

Kang concluded that governments need to do a better job reporting and monitoring abandoned wells, because they appear to be a significant and unexpected source of unaccounted methane emissions.

"Additional measurements are required to characterize and determine the distribution of methane fluxes from abandoned oil and gas wells in Pennsylvania and other regions," she wrote.

A major 2014 study by U.K. researcher Richard Davies in Marine and Petroleum Geologyreached the same conclusion and called for systematic long-term monitoring for both active and abandoned wells.