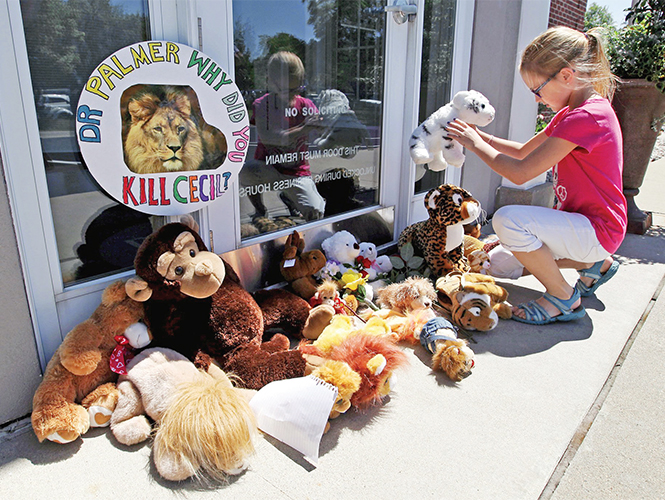 Walter Palmer, the US bowhunter who killed the famous Zimbabwean lion Cecil, has been pummeled on social media and condemned by conservationist Jane Goodall. His killing of the beloved cat has renewed criticism of trophy hunting.

But in 2009 he was described in a New York Times article as an “elite hunter” with a “purist’s reputation.” The article related how Palmer killed a trophy elk—worthy of consideration for the archery record books—in the Grizzly Island Wildlife Area, about 50 miles northeast of San Francisco. It went on to say:

Palmer, said to be capable of skewering a playing card from 100 yards with his compound bow, has cultivated a purist’s reputation for his disinclination to carry firearms as backup.

The way Palmer hunts has added to the fury over Cecil’s death. Goodall said:

Not only is it incomprehensible to me that anyone would want to kill an endangered animal (fewer than 20,000 wild lions in Africa today) but to lure Cecil from the safety of a national park and then to shoot him with a crossbow. I have no words to express my repugnance. He was not even killed outright, but suffered for hours before finally being shot with a bullet. And his magnificent head severed from his wounded body. And this behavior is described as a “sport.”

In 2008, court records show, he pleaded guilty to making a false statement to federal wildlife officials concerning the exact location of the slaying of a black bear during a guided hunt in Wisconsin. In his sentencing order, prosecutors had specifically agreed that the “defendant shall be permitted to possess archery equipment for lawful sporting purposes.”

Palmer parted the towering saltgrass and pickleweed downwind of the elk. Disturbed, the cows charged and the bull followed. Palmer had no angle. Only an arrow launched broadside or quartered away can make a clean kill, and Palmer was facing the bull straight on…

Palmer found his mark from 75 yards. The elk fell dead. Its antlers equaled the Goodnight elk to an eighth of an inch.

Presumably, he felt Cecil was wonderful, too.