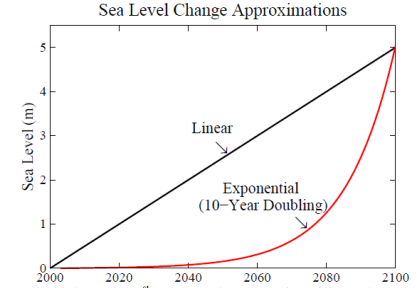 James Hansen, the former NASA scientist whose congressional testimony put global warming on the world’s agenda a quarter-century ago, is now warning that humanity could confront “sea level rise of several meters” before the end of the century unless greenhouse gas emissions are slashed much faster than currently contemplated.


July 20, 2015 - James Hansen’s new study explodes conventional goals of climate diplomacy and warns of 10 feet of sea level rise before 2100. The good news is, we can fix it.


This roughly 10 feet of sea level rise—well beyond previous estimates—would render coastal cities such as New York, London, and Shanghai uninhabitable. “Parts of [our coastal cities] would still be sticking above the water,” Hansen says, “but you couldn’t live there.”


This apocalyptic scenario illustrates why the goal of limiting temperature rise to 2 degrees Celsius is not the safe “guardrail” most politicians and media coverage imply it is, argue Hansen and 16 colleagues in a blockbuster study they are publishing this week in the peer-reviewed journal Atmospheric Physics and Chemistry. On the contrary, a 2 C future would be “highly dangerous.”


If Hansen is right—and he has been right, sooner, about the big issues in climate science longer than anyone—the implications are vast and profound.


Physically, Hansen’s findings mean that Earth’s ice is melting and its seas are rising much faster than expected. Other scientists have offered less extreme findings; the United Nations Intergovernmental Panel on Climate Change (IPCC) has projected closer to 3 feet of sea level rise by the end of the century, an amount experts say will be difficult enough to cope with. (Three feet of sea level rise would put runways of all three New York City-area airports underwater unless protective barriers were erected. The same holds for airports in the San Francisco Bay Area.)
Worldwide, approximately $3 trillion worth infrastructure vital to civilization such as water treatment plants, power stations, and highways are located at or below 3 feet of sea level, according to the Stern Review, a comprehensive analysis published by the British government.


Hansen’s track record commands respect. From the time the soft-spoken Iowan told the U.S. Senate in 1988 that man-made global warming was no longer a theory but had in fact begun and threatened unparalleled disaster, he has consistently been ahead of the scientific curve.


Hansen has long suspected that computer models underestimated how sensitive Earth’s ice sheets were to rising temperatures. Indeed, the IPCC excluded ice sheet melt altogether from its calculations of sea level rise. For their study, Hansen and his colleagues combined ancient paleo-climate data with new satellite readings and an improved model of the climate system to demonstrate that ice sheets can melt at a “non-linear” rate: rather than an incremental melting as Earth’s poles inexorably warm, ice sheets might melt at exponential rates, shedding dangerous amounts of mass in a matter of decades, not millennia. In fact, current observations indicate that some ice sheets already are melting this rapidly.


“Prior to this paper I suspected that to be the case,” Hansen told The Daily Beast. “Now we have evidence to make that statement based on much more than suspicion.”


The Nature Climate Change study and Hansen’s new paper give credence to the many developing nations and climate justice advocates who have called for more ambitious action.


Politically, Hansen’s new projections amount to a huge headache for diplomats, activists, and anyone else hoping that a much-anticipated global climate summit the United Nations is convening in Paris in December will put the world on a safe path. President Barack Obama and other world leaders must now reckon with the possibility that the 2 degrees goal they affirmed at the Copenhagen summit in 2009 is actually a recipe for catastrophe. In effect, Hansen’s study explodes what has long been the goal of conventional climate diplomacy.


More troubling, honoring even the conventional 2 degrees C target has so far proven extremely challenging on political and economic grounds. Current emission trajectories put the world on track towards a staggering 4 degrees of warming before the end of the century, an amount almost certainly beyond civilization’s coping capacity. In preparation for the Paris summit, governments have begun announcing commitments to reduce emissions, but to date these commitments are falling well short of satisfying the 2 degrees goal. Now, factor in the possibility that even 2 degrees is too much and many negotiators may be tempted to throw up their hands in despair.


They shouldn’t. New climate science brings good news as well as bad. Humanity can limit temperature rise to 1.5 degrees C if it so chooses, according to a little-noticed study by experts at the Potsdam Institute for Climate Impacts (now perhaps the world’s foremost climate research center) and the International Institute for Applied Systems Analysis published in Nature Climate Change in May.


“Actions for returning global warming to below 1.5 degrees Celsius by 2100 are in many ways similar to those limiting warming to below 2 degrees Celsius,” said Joeri Rogelj, a lead author of the study. “However … emission reductions need to scale up swiftly in the next decades.” And there’s a significant catch: Even this relatively optimistic study concludes that it’s too late to prevent global temperature rising by 2 degrees C. But this overshoot of the 2 C target can be made temporary, the study argues; the total increase can be brought back down to 1.5 C later in the century.


Besides the faster emissions reductions Rogelj referenced, two additional tools are essential, the study outlines. Energy efficiency—shifting to less wasteful lighting, appliances, vehicles, building materials and the like—is already the cheapest, fastest way to reduce emissions. Improved efficiency has made great progress in recent years but will have to accelerate, especially in emerging economies such as China and India.


Also necessary will be breakthroughs in so-called “carbon negative” technologies. Call it the photosynthesis option: because plants inhale carbon dioxide and store it in their roots, stems, and leaves, one can remove carbon from the atmosphere by growing trees, planting cover crops, burying charred plant materials underground, and other kindred methods. In effect, carbon negative technologies can turn back the clock on global warming, making the aforementioned descent from the 2 C overshoot to the 1.5 C goal later in this century theoretically possible. Carbon-negative technologies thus far remain unproven at the scale needed, however; more research and deployment is required, according to the study.


Together, the Nature Climate Change study and Hansen’s new paper give credence to the many developing nations and climate justice advocates who have called for more ambitious action. The authors of the Nature Climate Change study point out that the 1.5 degrees goal “is supported by more than 100 countries worldwide, including those most vulnerable to climate change.” In May, the governments of 20 of those countries, including the Philippines, Costa Rica, Kenya, and Bangladesh, declared the 2 degrees target “inadequate” and called for governments to “reconsider” it in Paris.


Hansen too is confident that the world “could actually come in well under 2 degrees, if we make the price of fossil fuels honest.”


That means making the market price of gasoline and other products derived from fossil fuels reflect the enormous costs that burning those fuels currently externalizes onto society as a whole. Economists from left to right have advocated achieving this by putting a rising fee or tax on fossil fuels. This would give businesses, governments, and other consumers an incentive to shift to non-carbon fuels such as solar, wind, nuclear, and, best of all, increased energy efficiency. (The cheapest and cleanest fuel is the fuel you don’t burn in the first place.)


But putting a fee on fossil fuels will raise their price to consumers, threatening individual budgets and broader economic prospects, as opponents will surely point out. Nevertheless, higher prices for carbon-based fuels need not have injurious economic effects if the fees driving those higher prices are returned to the public to spend as it wishes. It’s been done that way for years with great success in Alaska, where all residents receive an annual check in compensation for the impact the Alaskan oil pipeline has on the state.


“Tax Pollution, Pay People” is the bumper sticker summary coined by activists at the Citizens Climate Lobby. Legislation to this effect has been introduced in both houses of the U.S. Congress.


Meanwhile, there are also a host of other reasons to believe it’s not too late to preserve a livable climate for young people and future generations.


The transition away from fossil fuels has begun and is gaining speed and legitimacy. In 2014, global greenhouse gas emissions remained flat even as the world economy grew—a first. There has been a spectacular boom in wind and solar energy, including in developing countries, as their prices plummet. These technologies now qualify as a “disruptive” economic force that promises further breakthroughs, said Achim Steiner, executive director of the UN Environment Programme.


Coal, the most carbon-intensive conventional fossil fuel, is in a death spiral, partly thanks to another piece of encouraging news: the historic climate agreement the U.S. and China reached last November, which envisions both nations slashing coal consumption (as China is already doing). Hammering another nail into coal’s coffin, the leaders of Great Britain’s three main political parties pledged to phase out coal, no matter who won the general elections last May.


“If you look at the long-term [for coal], it’s not getting any better,” said Standard & Poor’s Aneesh Prabhu when S&P downgraded coal company bonds to junk status. “It’s a secular decline,” not a mere cyclical downturn.


Last but not least, a vibrant mass movement has arisen to fight climate change, most visibly manifested when hundreds of thousands of people thronged the streets of New York City last September, demanding action from global leaders gathered at the UN. The rally was impressive enough that it led oil and gas giant ExxonMobil to increase its internal estimate of how likely the U.S. government is to take strong action. “That many people marching is clearly going to put pressure on government to do something,” an ExxonMobil spokesman told Bloomberg Businessweek.


The climate challenge has long amounted to a race between the imperatives of science and the contingencies of politics. With Hansen’s paper, the science has gotten harsher, even as the Nature Climate Change study affirms that humanity can still choose life, if it will. The question now is how the politics will respond—now, at Paris in December, and beyond.