At the Jet Propulsion Laboratory's website the description accompanying the release of the image is "Among the fascinating features on dwarf planet Ceres is an intriguing pyramid-shaped mountain protruding from a relatively smooth area." 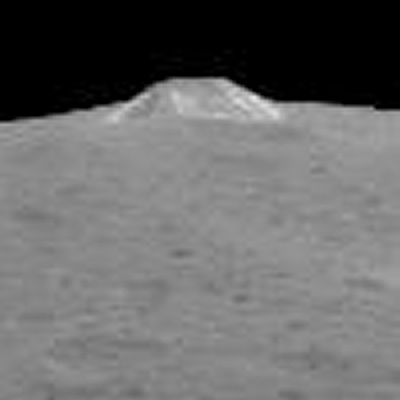 Dawn's mission is managed by JPL for NASA's Science Mission Directorate in Washington. Dawn is a project of the directorate's Discovery Program, managed by NASA's Marshall Space Flight Center in Huntsville, Alabama. UCLA is responsible for overall Dawn mission science. Orbital ATK, Inc., in Dulles, Virginia, designed and built the spacecraft. The German Aerospace Center, the Max Planck Institute for Solar System Research, the Italian Space Agency and the Italian National Astrophysical Institute are international partners on the mission team. For a complete list of acknowledgments, seehttp://dawn.jpl.nasa.gov/mission. For more information about the Dawn mission, visit http://dawn.jpl.nasa.gov. ADDITIONAL INFORMATION: NASA - Astronomy Picture of the Day - June 30, 2015http://apod.nasa.gov/apod/ap150630.html An Unusual Mountain on Asteroid Ceres Explanation: What created this large mountain on asteroid Ceres? No one is yet sure. As if in anticipation of today being Asteroid Day on Earth, the robotic spacecraft Dawn in orbit around Ceres took the best yet image of an unusually tall mountain on the Asteroid Belt's largest asteroid. Visible at the top of the featured image, the exceptional mountain rises about five kilometers up from an area that otherwise appears pretty level. The image was taken about two weeks ago from about 4,400 kilometers away. Although origin hypotheses for the mountain include volcanism, impacts, and plate tectonics, clear evidence backing any of these is currently lacking. Also visible across Ceres' surface are some enigmatic light areas: bright spots whose origin and composition that also remain an active topic of investigation. Even though Dawn is expected to continue to orbit Ceres, officially dubbed a dwarf planet, for millions of years, the hydrazine fuel used to point Dawn's communications antenna toward Earth is expected to run out sometime next year.

The photos of the mountain, first released to the general public on 17 June 2015, caused varied speculation. The tech website Cnet.com called the feature "an odd pyramid-shaped peak".[5] The website of NBC News commented on pictures of the mountain, noting Ceres's "intriguing features, including a steep-sided mountain that rises about 3 miles (5 kilometers) from the dwarf planet's heavily cratered surface and has been nicknamed 'the pyramid'".[6] In contrast to the NBC report, theWashington Post referred to "a pyramid-shaped peak that towers three miles high over an otherwise fairly flat surface".[7]

In an article in the Los Angeles Times dated 29 June, Christopher Russell, the principal investigator for the Dawn mission and planetary scientist at California's UCLA, stated "We do not know yet what made this peak on Ceres, let alone made it the observed shape. This is another total surprise to the [investigatory] team." Regarding the mountain, Russell also said: "We see only one of these on Ceres... Its uniqueness makes our understanding more difficult." Russell took note of bright streaks on the sides of the mountain, saying that although the mountain is not associated with the bright spots on Ceres, that the bright streaks run from the top down to the base of the lone peak, and he observed "The pyramid-like mountain isn't associated with any bright spots, but bright streaks run top to bottom on some of the slopes", further noting "It is possible that the bright material is the same as the bright material causing the bright spots.". He stated "better resolution" would be needed to answer that mystery.[8]

The mountain was the subject for NASA's Astronomy Picture of the Day on 30 June, 2015. The caption noted "Although origin hypotheses for the mountain include volcanism, impacts, and plate tectonics, clear evidence backing any of these is currently lacking."