The New Horizons mission to Pluto and the Kuiper Belt - the first NASA launch to a "new" planet since Voyager more than 30 years ago - allows the U.S. to complete the reconnaissance of the solar system. 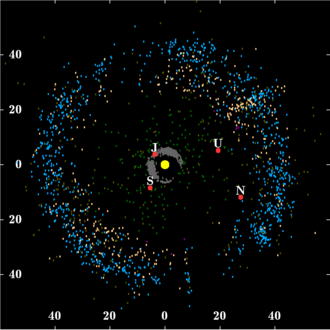 Known objects in the Kuiper belt beyond the orbit of Neptune (scale in AU; epoch as of January 2015).

New Horizons: Passport to Pluto and Beyond - Documentary [HD] The Mars Underground -

A Window Into Pluto, and Hopes of Opening Other Doors ...

hace 5 días - A Window Into Pluto, and Hopes of Opening Other Doors. JULY 15 ...New close-up images of a region near Pluto's equator reveal a giant surprise: ...Reaching Pluto, and the End of an Era of Planetary Exploration JUL 6

New Horizons: Passport to Pluto and Beyond - Documentary [HD]

Publicado el 18/06/2013
Mission Overview: Why Go to Pluto ? Planetary exploration is a historic endeavor and a major focus of NASA. New Horizons is designed to help us understand worlds at the edge of our solar system by making the first reconnaissance of Pluto and Charon - a "double planet" and the last planet in our solar system to be visited by spacecraft. Then, as part of an extended mission, New Horizons would visit one or more objects in the Kuiper Belt region beyond Neptune.


Science at the Frontier
Our solar system contains three zones: the inner, rocky planets; the gas giant planets; and the Kuiper Belt. Pluto is one of the largest bodies of the icy, "third zone" of our solar system. The National Academy of Sciences placed the exploration of the third zone in general - and Pluto-Charon in particular - among its highest priority planetary mission rankings for this decade. New Horizons is NASA's mission to fulfill this objective.
In those zones, our solar system has three classes of planets: the rocky worlds (Earth, Venus, Mercury and Mars); the gas giants (Jupiter, Saturn, Uranus and Neptune); and the ice dwarfs of the Kuiper Belt. There are far more ice dwarf planets than rocky and gas giant worlds combined - yet, no spacecraft has been sent to a planet in this class. The National Academy of Sciences noted that our knowledge of planetary types is therefore seriously incomplete. As the first mission to investigate this new class of planetary bodies, New Horizons will fill this important gap and round out our knowledge of the planets in our solar system.

.
Ancient Relics
The ice dwarfs are planetary embryos, whose growth stopped at sizes (200 to 2,000 kilometers across) much smaller than the full-grown planets in the inner solar system and the gas giants region. The ice dwarfs are ancient relics that formed over 4 billion years ago. Because they are literally the bodies out of which the larger planets accumulated, the ice dwarfs have a great deal to teach us about planetary formation. New Horizons seeks those answers.
.
Binary Planet
Pluto's largest moon, Charon, is half the size of Pluto. The pair form a binary planet, whose gravitational balance point is between the two bodies. Although binary planets are thought to be common in the galaxy, as are binary stars, no spacecraft has yet explored one. New Horizons will be the first mission to a binary object of any type.
.
A Mission with Impact
The Kuiper Belt is the major source of cometary impactors on Earth, like the impactor that wiped out the dinosaurs. New Horizons will shed new light on the number of such Kuiper Belt impactors as a function of their size by cataloging the various-sized craters on Pluto, its moons, and on Kuiper Belt Objects.

Pluto and the Kuiper Belt are known to be heavily endowed with organic (carbon-bearing) molecules and water ice — the raw materials out of which life evolves. New Horizons will explore the composition of this material on the surfaces of Pluto, its moons and Kuiper Belt Objects.
.
The Great Escape
Pluto's atmosphere is escaping to space like a comet, but on a planetary scale. Nothing like this exists anywhere else in the solar system. It is thought that the Earth's original hydrogen/helium atmosphere was lost to space this way. By studying Pluto's atmospheric escape, we can learn a great deal about the evolution of Earth's atmosphere. New Horizons will determine Pluto's atmospheric structure and composition and directly measure its escape rate for the first time.
.
The Need to Explore
As the first voyage to a whole new class of planets in the farthest zone of the solar system, New Horizons is a historic mission of exploration. The United States has made history by being the first nation to reach every planet from Mercury to Neptune with a space probe. The New Horizons mission to Pluto and the Kuiper Belt - the first NASA launch to a "new" planet since Voyager more than 30 years ago - allows the U.S. to complete the reconnaissance of the solar system.
.