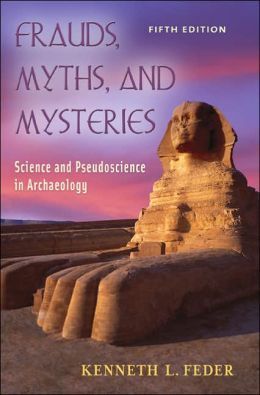 Feder appeared in the episode on ancient astronauts in the National Geographic Channel's Is It Real? and several episodes of the BBCdocumentary series Horizon discussing Atlantis and Caral. In 2004, he spoke at the World Skeptics Congress in Italy.[3] He is also a fellow of the Committee for Skeptical Inquiry (CSI), an international organization which promotes scientific inquiry.[10]

Feder's 1990 book Frauds, Myths, and Mysteries: Science and Pseudoscience in Archaeology attempts to explore various archaeological myths and misunderstandings by comparing phenomena that might otherwise appear unexplainable to similar occurrences and events that are scientifically documented.[4] Gordon Stein, writing for The Skeptical Inquirer, said of Feder's analysis, "While some of these (e.g.,Piltdown Man) have been covered by many previous authors, few have tried to use the tools of modern scientific archaeology to show why probability is greatly against the authenticity of the particular claim," going on to state that Feder uncovers areas "not often examined critically in the popular literature."[11] Feder's work is used as a textbook in a number of undergraduate courses[12] and is currently in its seventh edition.

In April 2001 Feder was consulted by a producer who was putting together a documentary about Atlantis for ABC, to follow the release of the network's parent company, Disney's, animated feature Atlantis: The Lost Empire that same year, and who was "looking for a reputable university anthropologist who was of the opinion that there is [a] historical and cultural connection between Atlantis and the native civilizations of the ancient New World."[5][13] Feder issued criticism of the documentary, which he stated was "packaging a television program to look like a science documentary that [...] amounted to an infomercial for a cartoon."[5][13] In the end, Feder did not contribute to the resulting documentary, Voyage to Atlantis: The Lost Empire, which aired June 10, 2001.[13][14]

Discussing the Bosnian pyramid with Steven Novella, Feder stated that it does not make sense that Visočica is anything other than a natural formation. "It's all about physical evidence... ancient pyramids don't build themselves." Feder claimed that pseudoarchelogists lack the training to do a professional job evaluating items they may find.[15]

Feder's book Encyclopedia of Dubious Archaeology addresses popular myths, by attempting to provide easily understood explanations for why some inaccuracies are perpetuated.[16] In his book, Feder also attempts to delineate the differences between findings that are questionable from "outright frauds."[16]