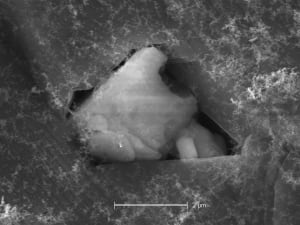 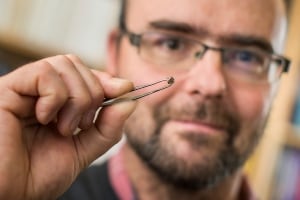 
Diamonds geology of the mantle, Nature


A coated ‘dirty’ diamond, created when a microinclusion-bearing fibrous coat is overgrown on a monocrystalline clear diamond. Most of the diamonds found near the Earth’s surface arose at depths of more than 150 km in the roots of old continents. Chemical impurities bottled up in dirty diamonds therefore hold valuable information about these deep, inaccessible regions of the Earth. Yaakov Weiss and co-authors present geochemical data from inclusions within a suite of eleven diamonds from the Ekati mine from the Northwest Territories, Canada. The data contain a clear chemical evolutionary trend that indicates the involvement of highly saline solutions in the formation of silicic and carbonatitic deep mantle melts. The chemistry of the saline fluids and the timing of host diamond formation suggest a subducting plate under western North America as the source of the fluids, implying a strong association between subduction, mantle metasomatism and fluid-rich diamond formation. This new model provides a context for resolving the effects of the compositional spectrum of mantle fluids, which alter the deep lithosphere globally and play key roles in diamond formation. Cover: Graham Pearson 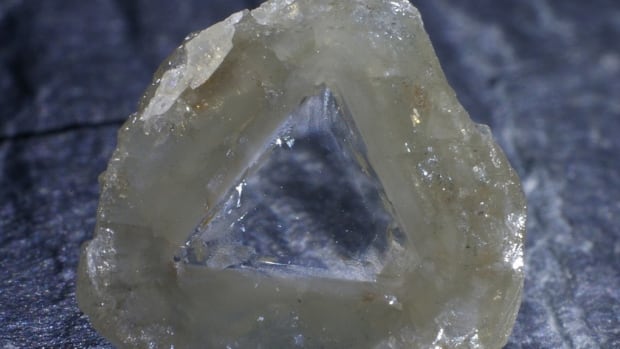 This diamond has a gem-quality core and fluid-rich 'coat.' The coat is studded with millions of tiny droplets of saltwater that have been trapped inside for hundreds of millions of years.

A few microscopic, ugly diamonds from the Northwest Territories are illuminating how diamonds are made — and pointing to an unexpected helper in the process. A new study suggests they formed from ancient seawater trapped deep below the surface of the Earth.

Most of us know that diamonds form deep underground under high pressure, but beyond that scientists have been fuzzy on the details.

They do know that diamonds form like other crystals — they crystallize from a fluid, like rock candy from a solution of sugar dissolved in water.

But they were never sure what that fluid was.

Now, a group of U.S., U.K. and Canadian scientists led by Yaakov Weiss at Columbia University in New York think they have good evidence that a key component of the fluid that produced at least some kinds of diamonds was ancient seawater, trapped 200 kilometres beneath the surface of the Earth.

"I think it really helped to get the diamond forming reaction going," says Graham Pearson, a University of Alberta geochemist who co-authored the paper, published today in the journal Nature."We would argue having some seawater and brine helps formation because it's a very reactive fluid."

He acknowledged that the idea is a "fairly bold conclusion" but that researchers have lots of evidence to back it up.

That evidence comes from 11 diamonds from the Ekati mine in the Northwest Territories.

The diamonds provided to the researchers by Dominion Diamonds aren't fit for a ring by any stretch of the imagination — they're far less than a millimetre wide and studded with droplets of fluid — millions of them, in some cases.

CAUGHT IN THE ACT

Fluids typically get trapped in minerals when they crystallize very quickly from solution, usually when they cool suddenly. The liquid trapped inside tends to be the solution that they crystallized from. Sudden cooling doesn't just trap impurities — it also produces much smaller crystals than gradual cooling. (This applies to making rock candy also.)

"It's really diamond formation caught in the act," Pearson told CBC News in a phone interview from Greenland, where he was on a research trip.

The researchers used a technique called spectroscopy that involved shining infrared light into the pockets and looking for the chemical signature of different substances. They found strong signals for carbonate (not surprising, since diamonds are made of carbon) and water.

The scientists then used lasers to vapourize the diamond, including everything trapped in the bubbles, and separated out and analyzed all the trace elements and isotopes in the sample.

A solid impurity inside a diamond contains minerals that grew from fluid trapped in the diamond when the diamond was cooled. (Yaakov Weiss)

What they found was very high concentrations of sodium and chlorine — the main components of the salt dissolved in seawater. And when they looked at the pattern of the kinds of strontium in the sample, it was "very similar to dissolved strontium in ancient seawater several hundred million years ago," Pearson said.

The researchers couldn't come up with any other explanation for all the salt, he added.

"There's nowhere really in the deepest parts of the earth that are obvious sources of all that sodium and chlorine."

That led the researchers to conclude that the source of the fluid was ancient seawater pushed under the Northwest Territories with nearby tectonic plates, whose edges are constantly subducting or moving into the Earth's crust beneath other plates. The seawater would have interacted with carbon-containing rocks to generate diamonds. 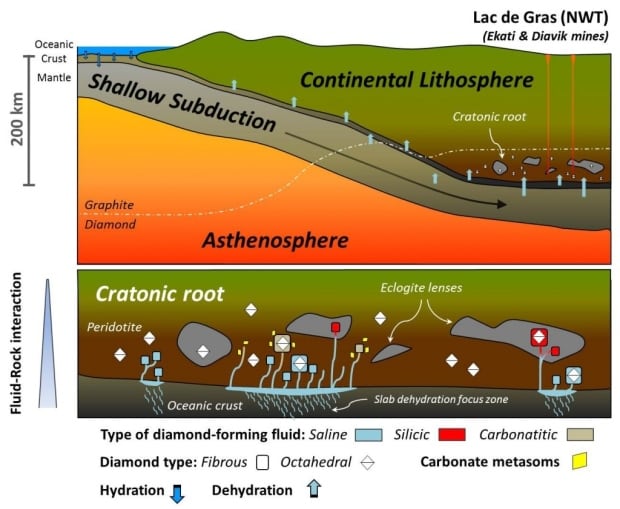 "The broader significance is that it provides now another key element in the picture of how water is cycled and carbon is cycled in the Earth," said Pearson. "This is really more evidence of recycling of fluid of water within the Earth."

While some diamonds contain fluids with other substances in them besides salt, they all appear to have started off as a brine solution that reacted with other minerals, Pearson said.

What remains a mystery is the relationship between the small, dirty diamonds that crystallize from seawater and the big, shiny gem-quality diamonds prized for earrings and engagement rings.

Daniel Howell is a research associate at the University of Bristol who has done research on diamond formation but was not involved in the new study. He said it builds a strong case for diamond-forming fluids starting off very salty and thinks the conclusions about diamond formation make sense for the Canadian diamonds used in the study.

But whether they apply to other kinds of diamonds in other parts of the world "remains to be seen," he said in an email to CBC News.

"Extensive work is still required to understand how these fluids are involved in mobilizing carbon in the deep Earth, and how diamonds are directly recording this."

The new study suggests that key part of the original fluid involved in forming some of the rich diamond deposits beneath the NWT, Canada, originates from ancient seawater subducted deep beneath the surface. (Weiss et al., Nature)