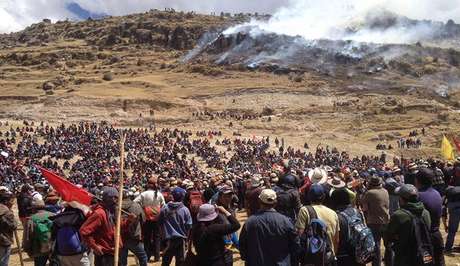 Two killed in protest at $7.4-billion MMG copper project in ...

hace 2 días - MMG said it remains open to dialogue and that communities near themine did not participate in the protests. "Las Bambas has demonstrated ...

Two protesters were shot dead and eight police officers wounded after a group of activists broke into MMG Ltd's $7.4- billion Las Bambas project in a remote Andean region in Peru, the government said on Monday.

Peru, the world's third biggest producer of copper, is expected to nearly double output of the metal in coming years, but is rife with conflicts over mining. Many towns near big projects fear pollution or seek more benefits.

The unrest in the highland town of Challhuahuacho comes as MMG has been wrapping up construction of a massive mine that is expected to add 400,000 tonnes of copper to global supply each year.

Protesters were demanding that MMG revise part of its environmental plan and hire more locals, authorities said. About 1,500 police officers and 150 military officers had been sent to the zone ahead of rallies that started on Friday.

Interior Minister Jose Luis Perez said radical groups from outside the area had provoked the clashes.

"Police used non-lethal weapons at the start, and then, to defend themselves, had to use lethal weapons," Perez said in a televised interview.

Police fired tear gas and live bullets at crowds during rallies that had been largely peaceful, said Uriel Condori, a councillor with the government of Challhuahuacho.

Residents of nearby areas were upset over a change to the mine's environmental plan they feared would lead to processing of more mineral concentrates and threaten the environment, said Condori.

A sudden drop in employment as work linked to the mine winds down has also fed frustration, Condori and Perez said.

President Ollanta Humala called for talks to settle the disputes.

MMG said it remains open to dialogue and that communities near the mine did not participate in the protests.

"Las Bambas has demonstrated through the years its vast capacity for working with communities in the area of influence," the company said in a statement.

Commercial production should start in May or June, MMG said last week.

Protesters in Challhuahuacho were not calling for Las Bambas to be canceled, Condori said.

"This will not stop the mine from going forward," Perez said.