gave a speech to faith leaders at St Paul's cathedral in London, 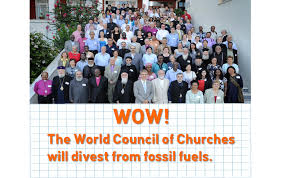 An umbrella group of churches, which represents over half a billion Christians worldwide, has decided to pull its investments out of fossil fuel companies.

The move by the World Council of Churches, which has 345 member churches including the Church of England but not the Catholic church, was welcomed as a "major victory" by climate campaigners who have been calling on companies and institutions such as pension funds, universities and local governments to divest from coal, oil and gas.

In an article for the Guardian in April, Archbishop Desmond Tutu said that "people of conscience need to break their ties with corporations financing the injustice of climate change" and events sponsored by fossil fuel companies could even be boycotted.

Bill McKibben, the founder of climate campaign group 350.org, said in a statement: "The World Council of Churches reminds us that morality demands thinking as much about the future as about ourselves – and that there's no threat to the future greater than the unchecked burning of fossil fuels. This is a remarkable moment for the 590 million Christians in its member denominations: a huge percentage of humanity says today 'this far and no further'."

The report of the council's financy policy committee, published on Thursday on the final day of the council's central committee meeting in Geneva, says that: "The committee discussed the ethical investment criteria, and considered that the list of sectors in which the WCC does not invest should be extended to include fossil fuels."

350.org's European divestment coordinator, Tim Ratcliffe, said: “The World Council of Churches may be the most important commitment we’ve received yet."

Thursday's decision only applies to the council's own investments, rather than its members, such as the Church of England. A CoE spokeswoman said: "The WCC decision refers to its own financial investments only and not those of its member bodies."

The Church of England said it could not yet comment on what the decision meant for its own investments. The CoE has not moved yet to divest from fossil fuel companies but has set up a subgroup to take advice on climate change and investment.

In May, the UN's climate chief, Christiana Figueres, gave a speech to faith leaders at St Paul's cathedral in London, calling on them to show leadership on climate change. She also said religious groups should drop their investments in fossil fuels, and encourage their members to do the same.

Studies have suggested the fossil fuel divestment campaign, which began in the US, has been faster than than any previous divestment movement such as tobacco and apartheid.