Gee, I thought Peru’s Central Bank was going to use the people’s money to intervene on behalf of the sol? Might have been a bigger negative reaction than they originally thought. I’m afraid this is only the beginning of the downside volatility. Nobody is comfortable with Humala.

Nobody? Yeah right, that’s why he won, because 51% of “nobodies” elected him.

The stock plunging was totally predictable and it obeys to investors pressure and boicot on what they consider an administration that will not favor their economic interests. Greediness it is called.

But you can believe what the mainstream media says instead if you have a sheep’s brain.

Check facts and see what happened after Lula won in Brazil.

Well, I believe you are in possession of the “sheep brain” if you don’t know that “nobody” refers to investors when discussing this topic. It is not a boycott and it is not greed. It is called preserving your wealth. Any prudent person practices that. Do you really believe any intelligent person is going to allow Humala’s policies control their future and just sit idly by and watch their hard earned investments vanish? Do you have two centimos to rub together? Wise up! Redistribution never works!

congratulations to peru and the new president ollanta,

regarding the lima bolsa ( stock exchange ), a fall of 8.7% is  not much if you really compare it against it,s actual growth from 2005, it,s up 500%, in 2008 thru 2009 it fell 300% because of economic problems in the US, the general index of lima is more or less lockstep with the Dow index  in the US, these indexes, including the dow are a roller coaster, the difference is on main street US, if you have a few $$ you can gamble or invest !, in peru the bolsa is a closed shop.

The smartest thing Humala could do at this point is appoint PPK for Minister of Economy and Finance.  This could calm alot of investors and show that he is truly for Peru’s continued advancement and not for settling scores.

Why so much negativity? Looks like Fear is ruling here.  Peru’s people are being marginalized by the Elite people, the ones who rule this country. That’s why the market is down. They fear and think that Humala will take their money and throw them out of the country. It is a tactic to scare people, and Fear is big.
What is wrong with having an Inca/Indian rule Peru? After all, they should rule because they are the real Peruvians. Unlike the whites who don’t belong in Peru. They invaded that country, and the Mestizos are slaves of the whites because they do and believe whatever the Elite say. Those who fear and believe that Peru is goind down, LEAVE PERU AND GO TO SPAIN WHERE YOU BELONG, OR GO TO UNITED STATES AND SEE IF THE AMERICANS WILL RESPECT YOU. If you are not happy with the leader of Peru, LEAVE! Nobody is forcing you to stay here and discriminate the Incas/Indias, for they are the real Peruvians who belong here in this beautiful country. You can insult and call names all you want, the Incas/Indians have the right to rule Peru. Quit Discriminating each other. Love your race. Mestizos indian/inca blood runs in your veins. get it! Good luck Humala, even though I am not Peruvian, I love that country.

Peru,N whatever… what are you? some kind of financial analyst wannabe?

Cheryl, financers and investors should chill out and stop being so paranoid. The official vote count hasn’t even reached 100%, Humala has not even been proclaimed president. The only idiot who is urging him to name a finance minister asap is U.S. citizen Kuczynski. Believe me, he is the last person Humala will have on the list, especially when Burneo, PPK’s vice-minister during the Toledo administration, has re-engineered Humala’s economic plans. Burneo would naturally be a more probable candidate.

The campaign is over, Humala won, and all those extreme right idiots (read entrepreneurs and media) should stop their terror-campaign that didn’t make them win the election. When are they going to learn?

Trading on the Lima Stock Exchange was suspended at 10 a.m. Monday as investors sold on news of left-nationalist Ollanta Humala’s seemingly imminent victory in Peru’s elections.

In anticipation that the market continues to fall, the Lima Stock Exchange decided to suspend trading until 11:00 a.m. local time as a security measure.

According to a statement from the Lima Stock Exchange, the suspension will give investors time to find out what the country is going through and allow them to make better decisions.

According to Bloomberg, the MSCI All Peru Capped Index declined 7.7 percent, the most on record, to 2,562.49. 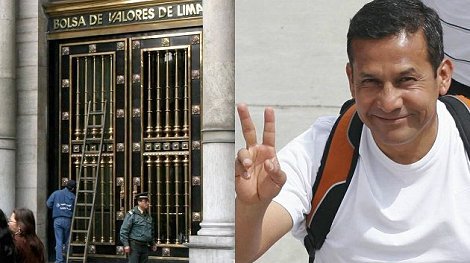 Nobel prize-winner Mario Vargas Llosa said he does not believe that the virtual triumph of Ollanta Humala in the presidential elections represents a threat to economic development or political stability in Peru, reports El Comercio.

“The victory of Humala, contrary to what opponents say, does not jeopardize economic development. I think he has given enough proof, especially in the second round, that he will respect political democracy, market economy, private property and is not going to jeopardize Peru’s notable economic growth, however, will spread the fruits of this development throughout the country,” he said on “Buenos Días, Perú.”

On the polarization in Peru, Vargas Llosa said it is up to the next president to end the climate of hostility that exists.

“I think (Humala) must multiply his gestures to reconcile these bitter adversities, showing that he was elected president of Peru and not president of his supporters. He will govern for all Peruvians. All Peruvians of good will are called to assist in this daunting task which is to fight poverty, underdevelopment and strengthen our democratic system that is very weak,” he said.

After stating that his work has culminated in this election, Vargas Llosa said he will be keeping a close eye on the government. “If this candidate doesn’t fulfill his promises, I will certainly intervene with the same energy and conviction that I intervened in this campaign by Ollanta Humala,” he said.

He concluded by saying that democracy is based on the new middle class and young people “with great strength will leave poverty behind and become the future of Peru.”

Ollanta Humala and wife Nadine Heredia at a rally Sunday night. “We need to fix the problem of inequality,” he said. “For that reason I’m here in front of you.” (Photo: Alberto Orbegoso/Andina)

The official count is edging towards the exit polls and quick counts released by polling firms on Saturday afternoon following elections. A quick count at polls by Ipsos Apoyo predicted a 51.4% to 48.6% victory by Ollanta Humala.

The majority of votes counted thus far come from the capital city of Lima and other urban areas, said Magdalena Chu, head of Peru’s elections offices.

Only a small percentage of votes from abroad have been counted. In the April 10 first round of elections, about 300,000 valid votes were cast by Peruvians abroad.

A quick count at polls by the survey firm Ipsos Apoyo predicted a 51.4% to 48.6% victory by Ollanta Humala.

Ollanta Humala, yelled “we have won” to a crowd of cheering supporters after exit polls and partial tallies give him the lead over Keiko Fujimori.

“I renew my promise with Peruvians for economic growth with social inclusion,” said Humala in the Plaza Dos de Mayo in Lima’s historic downtown.

“The great transformation that arrives today to the Government Palace is product of the work of millions of Peruvians that have fought for democracy and its values,” Humala said.

He continued to list problems facing Peru that his government would tackle, such as corruption, poor infrastructure, and inequality. “We need to fix the problem of inequality,” he said. “For that reason I’m here in front of you.”

With 78% of votes tallied in Peru’s elections, Ollanta Humala leads with less than one tenth of a percent over Keiko Fujimori.

The preliminary results show a razor-thin Humala lead of 50.09% to 49.91%. The majority of votes counted thus far come from the capital city of Lima and other urban areas, said Magdalena Chu, head of Peru’s elections offices.

A quick count at polls by the survey firm Ipsos Apoyo predicted a 51.4% to 48.6% victory by Ollanta Humala.

In her first speech after today’s exit polls placed Ollanta Humala as the winner, Keiko Fujimori told supporters she will respect the official results.

“I will wait for the results with the necessary prudence,” Fujimori said from a balcony of Hotel Bolívar in Lima’s historic downtown.

“If official results back the difference we’ve seen in the quick counts, I will be the first to recognize the results, as I’ve said since the beginning,” she said. “I ask Humala supporters the same thing: Wait for the final results with a lot of responsibility and prudence.”

Fujimori won in Lima and Callao, but Humala took practically the rest of the country.

See the chart below for results per region:

Humala has 52.2 percent and Fujimori 47.8 percent according to CPI poll firm, a difference of 4.4 points.

Datum gives Humala 51 percent and Fujimori 49 percent, with a difference of two points.

Quick count results are obtained over a sample of scrutinized votes, which makes it a more reliabe mechanism, as opposed to exit polls that are based on surveys done to voters when they’re leaving the voting centers.

Official results will be made public at 9 p.m. according to Onpe.

Exit poll results have a margin of error of three percent.

The first official results will be available at 9 p.m. according to the National Office of Electoral Processes (Onpe).