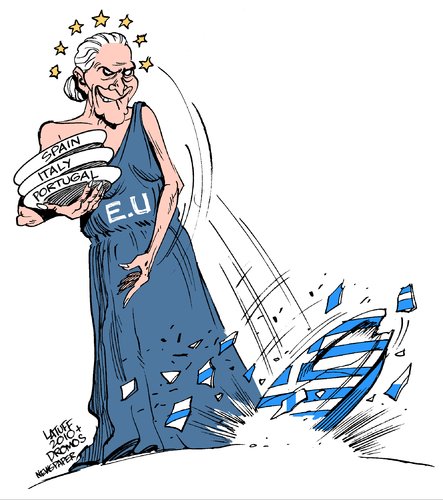 Read the rest of this entry »

Mario Blejer, a former governor of Argentina’s central bank, has said that the eurozone bailouts are being running as a giant Ponzi scheme and that  EU taxpayers are going to end up picking up the bill in an astonishing report in the Financial Time.

The report was pinted on May 5th and even carries the headline: “Europe is running a giant Ponzi scheme.” Could it be stated any clearer?

The implications of a leading figure in the world of finance stating that the eurozone is being run as a “public sector” Ponzi scheme looting the tax payers are staggering, and should surely lead to a criminal probe.

If Bernie Maddoff went to jail for running a private Ponzi scheme, why aren’t  ECB chief Jean- Claude Trichet, ESMF chief Klaus Regling,  and Deutsche Bank chief Josef Ackermann not in jail since they are playing such a key role in the much bigger, criminal, public sector eurozone Ponzi scheme?

Readers of this blog will be familiar with the reasons for considering the eurozone bailout to be part of a gigantic ponzi scheme, but when a major mainstream newspaper prints a report like this by a former central bank governor it represents a turning point. It also strongly suggests that the inevitable collapse  of the euro Ponzi scheme is approaching very fast.

Blejer points out that the eurozone bailouts violate the EU constitution and a central principle of the euro. In effect, the no bail-out clause acts as an insolvency mechanism that limits the damage to other eurozone country’s of any one member going into unsustainable debt.

The eurozone bailouts, on the other hand, allow country’s to build up unstainable debt burdens and to pass the financing of these debt burdens to other eurozone tax payers. The profiteers of this public sector Ponzi scheme  are the bondholders and the banks as Franz Hörmann explains in his report “How banks create money out of air”.

Blejer points out that this “public sector Ponzi scheme” is more “flexible” than a private sector Ponzi scheme such as Bernie Madoff’s because complicit governments can find more ways to collect eurozone tax payer money and expropriate assets to feed into this Ponzi scheme.

“One of the pillars upon which the euro was established was the principle of “no bail-out”. When the sovereign debt crisis hit the eurozone this principle was ditched. As Greece, Ireland and Portugal were unable to service their unsustainable levels of debt, a mechanism was instituted to supply them with the financing necessary to service their obligations,” Blejer writes.

Blejer points out that the EU and IMF have imposed crushing conditions on servicing the souvereign debt,  sending countries like Greece, Ireland and Portugal into a so-called debt death spiral.

“This financing was provided, supposedly, in exchange for their implementing measures that would make their, now higher, debt burdens sustainable in the future. Yet the mode adopted to resolve the debt problems of countries in peripheral Europe is, apparently, to increase their level of debt. A case in point is the €78bn ($116bn) loan to Portugal. It is equivalent to more than 47 per cent of its gross domestic product in 2010, possibly increasing Portugal’s public debt to about 120 per cent of GDP,” Blejer writes in the FT.

Blejer notes that the “countries’ debts will increase (as a percentage of GDP the debts of Greece, Ireland, Portugal and Spain are expected to be higher by the end of 2012 than at the start of the crisis).”

Blejer observes that the bondholders are picking up the assets of Greece while transferring the growing portion of unserviceable debt onto the tax payer’s of Europe.

“The share of debt owed to the official sector will also increase (in addition to the bond purchases by the European Central Bank, which reportedly owns 17 per cent of these countries’ bonds with a much higher percentage held as collateral),” Blejer writes.

He notes that Greece, Ireland and Portugal are insolvent and that the narrative that they are illiquid is a “fiction” allowing banks and bondholders to hoodwink taxpayers as they carry on looting.

Tha bailout is “based on the fiction that this is just a temporary liquidity problem and that the official financing helps the countries involved to make the reforms that will allow them to return to the voluntary market in normal conditions. In other words, the narrative is that the recipient countries could and would outgrow their debt,” he writes.

Debt figures are manipulated, he says, but “the fact is that this situation is only sustainable as long as additional amounts of money are available to continue the pretence.

Blejer could not be more explicit:

“Here is where this situation resembles a pyramid or a Ponzi scheme,” he says in the FT. “Some of the original bondholders are being paid with the official loans that also finance the remaining primary deficits. When it turns out that countries cannot meet the austerity and structural conditions imposed on them, and therefore cannot return to the voluntary market, these loans will eventually be rolled over and enhanced by eurozone members and international organisations. “

“Moreover, this “public sector Ponzi scheme” is more flexible than a private one. In a private scheme, the pyramid collapses when you cannot find enough new investors willing to hand over their money so old investors can be paid. But in a public scheme such as this, the Ponzi scheme could, in theory, go on for ever. As long as it is financed with public money, the peripheral countries’ debt could continue to grow without a hypothetical limit.”

Blejer notes that political opposition is growing to this criminal activity.

“We are starting to observe public opposition to financing this Ponzi scheme in its current form, but it could still have quite a way to go. It is apparent that, if not forced sooner by politics, the inevitable default will only be allowed to take place when the vast part of the European distressed debt is transferred from the private to the official sector. As in a pyramid scheme, it will be the last holder of the “asset” that takes the full loss. In this case, it will be the taxpayer that foots the bill, rather than the original bondholders that made the wrong investment decisions,” he says.