After Arizona, followed by Alabama, Utah, Indiana, Georgia and South Carolina passed punitive laws in their assemblies to more severe … 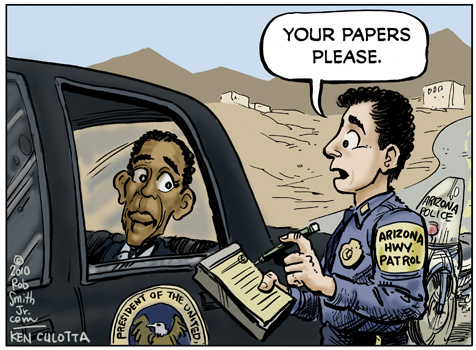 After Arizona, followed by Alabama, Utah, Indiana, Georgia and South Carolina passed laws in their assemblies to more severe in some things. Some organizations that advocate for civil rights have been successful in court against these laws, advocates of immigrant communities in the U.S. are concerned about the inaction of President Barack Obama to address the state law.

MIAMI (AP) — Nearly every state in the union tried to tackle immigration on its own this year in the absence of any congressional movement on the matter, and more than half considered Arizona-style enforcement measures, up from just six in 2010.

But an Associated Press review found that in legislature after legislature, nearly all the most punitive measures failed.

What had passed as of Monday mostly reinforced current federal law, though a small number of states actually passed legislation that was helpful to illegal immigrants.

Many measures were set aside so lawmakers could focus on pressing budget crises, but immigrants have also developed more sophisticated lobbying efforts, and business owners came out strongly against tougher sanctions. Some worried about losing sources of labor and gaining extra paperwork. Others feared tourism boycotts like the one organized against Arizona.

Early in the year, high unemployment, a slew of newly Republican-dominated legislatures and nationwide frustration over the failure by the White House or Congress to address the problem suggested Arizona’s law would be copied.

That law makes it a state crime for an illegal immigrant to work, penalizes employers who hire them and encourages local authorities to turn over illegal immigrants to federal authorities, among other measures. An appellate court has blocked provisions that require immigrants carry visa documents and allow police broad leeway to question the immigration status of those they suspect are in the country illegally.

“I’m just trying to give them a little Taser move in the right direction,” he said.

But Harrison’s bill has yet to move out of committee, and most of the others failed, as did most of the proposals requiring businesses to use the federal government’s electronic E-verify system to check the eligibility of new hires. Only a few states made any serious attempt to crack down on employers.

So far, only Georgia and Utah have passed comprehensive bills. South Carolina and Alabama are still considering them. Utah’s law includes a provision to allow illegal immigrants to work in the state, and the American Civil Liberties Union has already sued Utah over the law’s enforcement provisions.

Georgia was the shining example for those hoping to step up enforcement and the closest to Arizona. Its new law allows local officers to check the immigration status of a suspect who can’t produce an accepted form of ID. It also includes a provision requiring employers with more than 10 employees to use E-Verify by July 2013, similar to a 2007 law Arizona. Georgia Gov. Nathan Deal signed the bill earlier this month and opponents say they plan to sue the state.

Arizona lawmakers ordered school districts to report students’ residency, but that was geared toward keeping children who live across the Mexican border from enrolling in Arizona schools.

Only Indiana passed a law to prohibit in-state tuition for those in the country illegally, a largely symbolic move.

Most legislation never gets out of committee, and compromise is always key.

But experts on both sides credit businesses for much of the legislations’ failure.

“Business owners came out of the woodwork in a way they hadn’t done before,” said Tamar Jacoby, president of ImmigrationWorks USA, a national federation of mostly small-business owners who support immigration reform.

Many Florida businesses said they feared the economic damage that would be caused if the state were hit by a tourism boycott like the one immigrant rights groups organized against Arizona.

In Arizona, 60 top executives signed a letter to Arizona’s Senate president, asking for a moratorium on immigration bills.

In Utah, businesses helped create the Utah Compact, the basis for the most comprehensive immigration law to come out of the states. It resembles Arizona on enforcement but allows illegal immigrants to work in Utah. A judge blocked the bill last week, following the ACLU lawsuit.

Indeed, in Florida, the House and Senate couldn’t reach a compromise on the E-verify component, and the proposals died. The Indiana and Alabama legislatures faced similar splits between their House and Senate over measures targeting employers.

Jacoby said it was the Arizona-like enforcement sections of the bills that generated the attention and public debate, and that in many states, E-verify went down along with them.

Mark Krikorian, executive director of the Center for Immigration Studies, which advocates stricter limits on immigration, believes many businesses concerned about E-verify cynically stoked opposition to the bills by emphasizing the enforcement angle.

“The businesses community really did pull out all the stops on this, and I have to give them props,” Krikorian said. “The strategy was to make a big deal about Arizona-style legislation in order to scare off E-verify.”

Immigrants and their supporters were also ready to battle, capitalizing on networks they developed in recent years in response to Arizona’s law and the federal government’s stepped-up deportation efforts.

In Florida, farmworkers, students and other immigrants and activists spent weeks at the Capitol, protesting and praying during committee hearings but also lobbying heavily behind the scenes.

The progressive Latino group Democracia USA took out ads against proposals in Colorado, Pennsylvania and Florida. President Jorge Mursuli said backers of some state bills couldn’t answer basic questions about the legislation, such as whether families hiring nannies would have to use E-verify, or whether employers would be on the hook for unemployment insurance for new hires found ineligible to work.

“A lot of folks were doing this as a political stunt, rather than as a real policy effort,” he said.

Still, those itching for action in Washington may get their wish. Immigration groups and those who support enforcement-only measures say they will redouble lobbying efforts at the federal level. Last week, Democratic senators in Washington reintroduced the Dream Act, though it’s unlikely to pass the Republican-led House, and certainly not before the 2012 election.

Krikorian noted the Supreme Court will soon rule on the constitutionality of a 2007 Arizona law that mandated all companies there use E-verify. If that law is upheld, he believes other states will again follow Arizona’s lead.