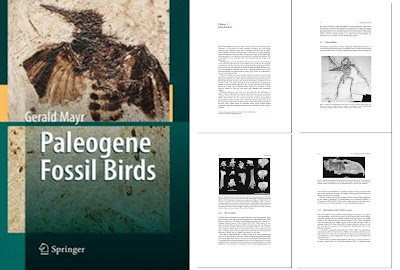 The Paleogene fossil record of birds in Europe - ‎Mayr -

The book is the first detailed review of the Paleogene avian fossil record on a worldwide scale. Numerous well-preserved fossil bird remains from this geological period, which covers the time span from the end of the Mesozoic era to the beginning of the Miocene, have been described in the past two decades. Some of these not only provide information on morphological transformations in the evolutionary history of the extant avian taxa, but are also of great significance for an understanding of their historical biogeography. Others represent extinct taxa which sometimes show a bizarre morphology not found in modern birds, such as the giant pseudo-toothed birds which reached wingspans up to six meters.The reader is introduced to basic morphological features of the various groups which, as far as possible, are placed into a phylogenetic context in the light of current hypotheses on the interrelationships of extant birds. In a concluding chapter the biogeographical significance of Paleogene fossil birds and possible reasons for faunal changes during the Paleogene are detailed. As such, the book not only aims at providing an overview for specialists, but may also help students of other fields of vertebrate paleontology to better understand Paleogene ecosystems.

Gerald Mayr is a German palaeontologist who is Curator of Ornithology at the Senckenberg Research Institute in Frankfurt am Main, Hesse. He has published extensively on fossil birds, especially the Paleogene avifauna of Europe. He is an expert on the Eocene fauna of the Messel pit.[1][2]

Frankfurt, 05/28/2014. Scientists of the Senckenberg Research Institute in Frankfurt have described the oldest known fossil of a pollinating bird. The well-preserved stomach contents contained pollen from various flowering plants. This indicates that the relationship between birds and flowers dates back at least 47 million years. The fossil comes from the well-known fossil site “Messel Pit.” The study was published today in the scientific journal “Biology Letters.”

The skeleton of the flower-visiting bird
found in Messel  © Senckenberg

They fly from flower to flower, and with their long, slender bills they transfer the pollen required for the plants’ reproduction. Particularly in the tropics and subtropics, birds, besides insects, serve as the most important pollinators.

“While this process is well known and understood in the present, geological history has offered very little evidence of pollination through birds,” says Dr. Gerald Mayr, head of the Ornithological Section at the Senckenberg Research Institute in Frankfurt. He adds, “there have been occasional hints, such as characteristic bill shapes, that nectarivorous birds occurred in the past, but, so far, there existed no conclusive evidence.”

Now, however, the ornithologist from Frankfurt and his colleague, paleobotanist Dr. Volker Wilde, have found this evidence. In the well-preserved stomach contents of a fossil bird unearthed in the Messel Pit, the scientists discovered fossilized pollen grains.“This is another discovery that underlines the unique significance of the Messel fossil site,” exclaims a delighted Dr. Wilde. “Not only does the presence of pollen offer direct evidence of the bird’s feeding habits, but it shows that birds already visited flowers as long as 47 million years ago!”

Fossil evidence for the existence of pollinating insects dates back to the Cretaceous period. Until now, however, there had been no information at what time pollination through vertebrates, and birds in particular, came into existence. To date, the oldest indication of an avian pollinator came from the early Oligocene, about 30 million years ago. “But this hummingbird fossil only offers indirect evidence of the existence of nectarivorous birds,” explains Mayr. “Thanks to the excellent state of preservation of the Messel bird, we were able to identify two different types of pollen, which is the first conclusive proof of nectarivory.”Large numbers of differently sized pollen grains were found in the stomach contents of the completely preserved avian fossil. “Along with the bird’s skeletal anatomy, this indicates that we indeed have the fossil of a nectarivorous bird” explains Wilde.

And the spectacular discovery also suggests another conclusion: If a pollinating bird lived as much as 47 million years ago, it must be assumed that some representatives of the flora at that time had already adapted to this mode of pollination.
“To date, there are no fossil plants from this geological era that offer proof of the existence of ornithophily – i.e., the pollination of flowers through birds,” adds paleobotanist Wilde.
“However, the characteristic traits of bird-pollinated plants, such as red flowers or a lack of scent, do not fossilize,” elaborates Mayr. This lends an even greater importance to discoveries such as the Messel bird to understand the interactions between birds and flowers through geological time.

The press images may be used at no cost for editorial reporting, provided that the original author’s name is published, as well. The images may only be passed on to third parties in the context of current reporting.

To study and understand nature with its limitless diversity of living creatures and to preserve and manage it in a sustainable fashion as the basis of life for future generations – this has been the goal of the Senckenberg Gesellschaft für Naturforschung for almost 200 years. Through its exhibits and museums Senckenberg showcases and shares the current results of its natural history research with the public and offers insights into the past and present changes in nature, their causes and effects. Additional information is available at www.senckenberg.de.